Wired Magazine brought their tech curation skills to NYC again this year, hosting a popup brick-and-mortar that felt more like a cool science fair than a holiday retail store. The Wired Store showcases some of the most interesting new tech gadgets of the year. The store moves around annually, and is located in the Meatpacking District this season. The crowd was a mix of shoppers, tourists, families with children, and tech geeks. Gadgets ranged from cars, bicycles, 3D glasses, educational apps, games, tents, and more. We’ll focus on the ed tech gadgets, with a few gratuitous games thrown in for fun.

Kim Kelleher, Publisher of Wired, spoke to Triangle Below Canal about the store. “We’re celebrating the 10th anniversary of the Wired Store,” Kelleher cheered, adding, “If you’re looking for ed tech, you’re in the right place.” Kelleher and her team shared that Wired covers quite a bit of education technology, and the Wired Store appears to be an extension of that commitment. Wired curated some of today’s coolest games and apps for inclusion in the exhibit-like space.

Two of the educational gadgets featured use apps to facilitate learning for primary and middle school children. It’s pretty clear how timely the apps are, but a little data doesn’t hurt: A 2013 study by Common Sense Media found that 72 percent of children eight and under use tablets or smartphones (up from 38 percent in 2011), as well as more than a third of children under two.

Brooklyn-based educational app company Tinybop occupied a large exhibit space complete with activities for the kids, including a mural kids could write on. Given they are local, Tinybop had lots of folks on hand to showcase their newest iOS game, Homes. If Tinybop can build on the success of their two earlier games—The Human Body and Plants—they would be in a fine position for sure. The Human Body was downloaded 4.7 Million times in one week (after being featured as the free app of the week)—every app maker’s dream. So how did they make it a reality?

After creating The Human Body, Tinybop had planned to give out several promo codes for free downloads, particularly to underserved schools. But the App Store only allots 50. So they reached out to inquire about more. Apple responded by featuring The Human Body as the free app of the week, putting the app’s inertia in play. And if you’ve been to an Apple Store recently, you might have noticed that The Human Body is featured on the splash video across all devices. Additionally, over 30,000 schools around the world have purchased the app through Apple’s Volume Purchase Program.

Tinybop’s games are crafted to help children gain context, of the body, the natural world, the home, etc. They are beautifully designed—the visuals, the sounds, and the immersive play. Award winning illustrator Tuesday Bassen designed the highly lauded visuals. And the team’s sound designer created original sounds for the games. The team includes research associates and other educational specialists to align learning and curricula into the app. The attention to detail is part of what makes the app so right-on. 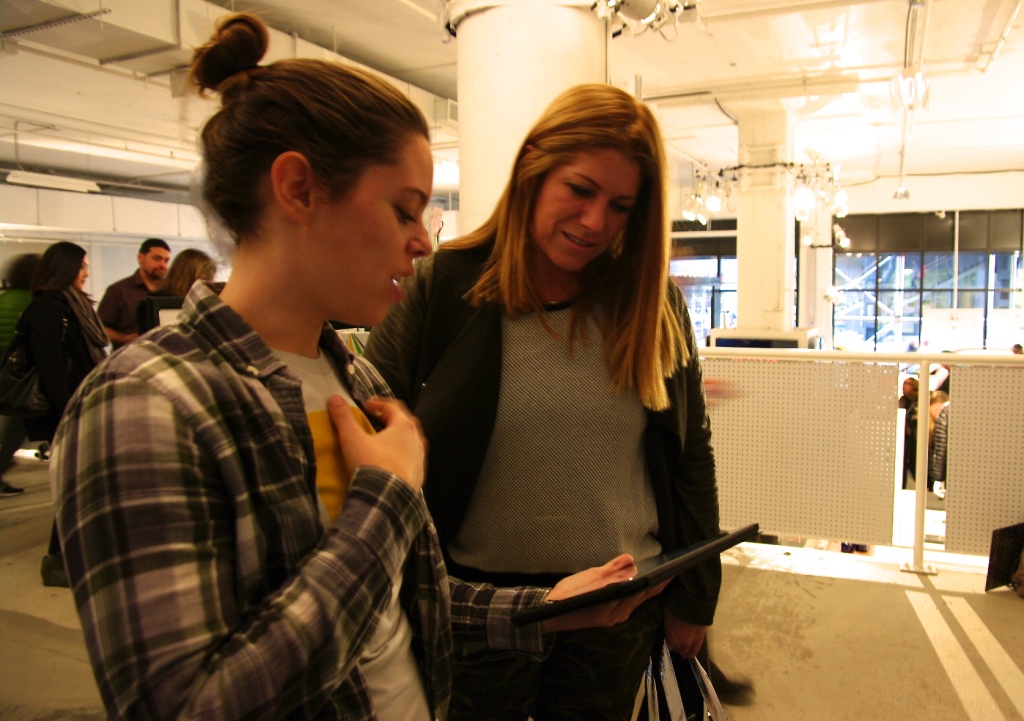 Tinybop’s Wired Store space included a mural for kids to write on. Some down time featured.

The kitchen of a home in Mongolia from Tinybop’s new Homes app.

The Human Body app by Tinybop as featured on devices in the Apple Store.

What’s the first thing most kids do upon entering the Homes app? “Make a mess!” shared Kika Gilbert, Head of Community at Tinybop, and on-hand at the Wired Store exhibit. “Homes encourages children to build empathy and cultural understanding of how people live around the world,” she added. The app starts by allowing users to choose a home from among a few countries, including Mongolia, Guatemala and the US. Users then get to explore various rooms in the home and engage with everyday household items. In Guatemala, one can enter a room with a loom, choose a fabric, work the loom, and then use a sewing machine to make a pair of (awesome) pants. In Mongolia, users can enter the kitchen, cook, and then eat a meal that includes some yummy looking dumplings. “There are no people in the games so kids can imagine themselves in it or imagine the people who live there,” stated Gilbert.

The Homes app uses features of a smart device to complement learning. For example, when users look in a mirror on the wall of a room, they can see their reflection, an image that is pulled live from the camera lens. Additionally, users can upload their own photos, add them to frames, and place them on the walls of the home as custom decorations.

A parent dashboard includes handbooks in 12 languages to help families and teachers guide student exploration, including co-play ideas. For example: How is my home similar or different than the homes featured in the app? On the product map for the dashboard is a recording function so that kids and their parents can leave questions for one another directly in the app. Because of strict data rules associated with children under COPPA (the Child Online Privacy Protection Act), the app does not send usage data back to Tinybop.

Gilbert let on that Tinybop has two new games in the pipeline. She wouldn’t give details, adding, “We get a lot of requests!” So better to stay mum until the games are out of development in case anyone is disappointed their idea wasn’t chosen. Both The Human Body and Plants took about 8 months to develop, with Homes taking more like 5-6 months. The new games are expected in Spring 2015.

Currently, Tinybop apps are only available in iOS (and utilize Apple’s new programming language, Swift). The folks at Tinybop plan to focus on making more iOS apps before considering Android. The Homes app is available in 59 languages. The sweet spot for age range is ages 4-10. Homes costs $3.99 to download.

The Ozobot might come in a small package, but it’s a showstopper. One of several new games/toys to help introduce programming to children, Ozobot is a ‘smart robot’ designed to teach robotics and coding through games. Place Ozobot on a smart phone, tablet, or piece of paper, and watch him cruise across mazes and tracks. The toy reacts to lines, colors and patterns. Ozobot comes with a free app and pre-printed ‘track’ cards to facilitate learning, and single and multi-player gaming. The team at Ozobot created 4 lessons that match up to CORE, STEM and STREAM curriculums. The lessons range from “the most basic levels of robotic behavior to sequential programming and complex algorithms.” While it is cool to watch Ozobot go on a smart device, the fact the it works on paper increases its flexibility and accessibility–always a good way to reach more learners. The cost is $49 for a single pack.

Ozobot following lines, colors and patterns on both paper and a tablet to help teach kids about robotics and programming.

Voxiebox brought their holographic entertainment system all dressed up as an arcade-style video game. With its physical size and its colorful images, the game elicited a lot of gawking. The arcade frame included four stations with control panels on each side of the box—sort of like playing Ms. Pacman/Galaga exponentially and standing up. It was 3D without the goggles. The system can be rented for a pretty penny. 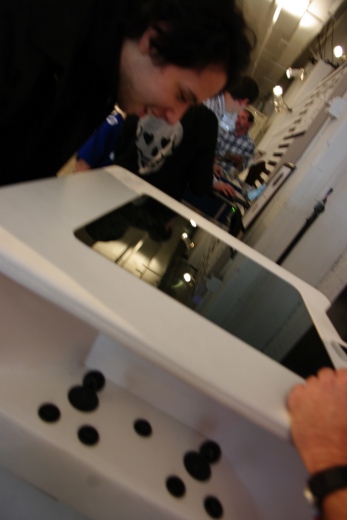 Speaking of 3D, Oculus Rift virtual reality glasses were a popular item with store visitors. Try them on, look silly in front of perfect strangers, but feel cool because you are literally in your own world. The game on display was pretty basic–you are a man walking around your home, garage and lawn. You might recall, in March 2014, Facebook acquired the makers of the glasses, Oculus VR, for $2 billion in cash and Facebook stock. The glasses run at $350. 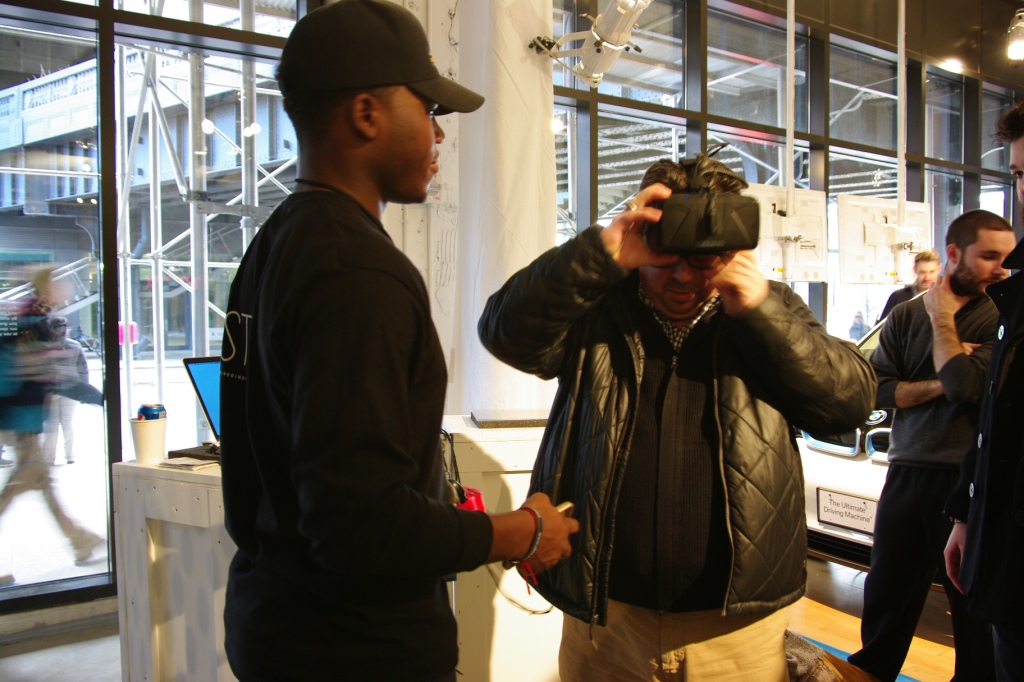 A Wired Store visitor adjusting the Oculus Rift on display.

Swedish designer and craftsman Love Hultén took a compact approach to arcade gaming with the R-Kaid-R (pronounced Arcader). Inside of a well-crafted wooden case (designed to develop a beautiful patina over time) is a portable arcade system that stores over 10,000 games. Hultén clearly has a love for the old school, including classic games. The R-Kaid-R is not cheap, but it is the type of gift that would make any gamer feel classy, San Diego [gratuitous Anchorman reference].

The Wired Store brick-and-mortar in NYC is open from December 11-21, 2014. If you can’t make it in person, try their online store. 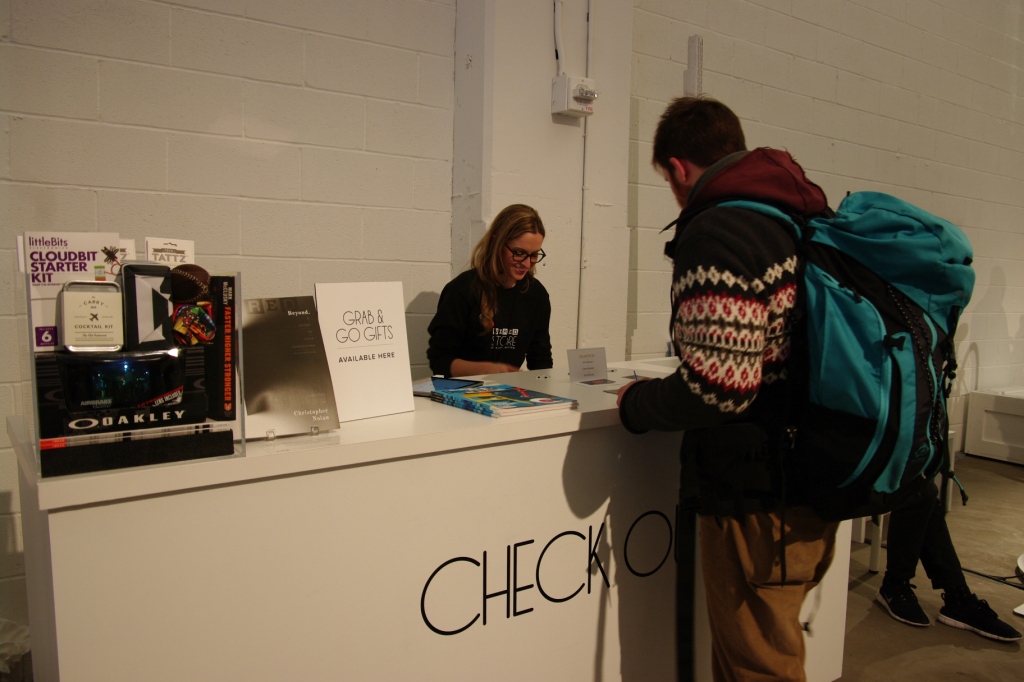